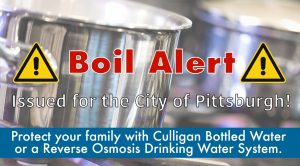 A flush and boil water advisory has been issued for 19 northern Pittsburgh neighborhoods, as well as Millvale and Reserve Township.

The Pittsburgh Water and Sewer Authority issued the warning as a precautionary measure after evidence of a tear in the high-density polyurethane cover in the 133-million gallon Lanpher Reservoir in Shaler Township was discovered, along with potential droppings from birds roosting. Though officials discovered the tear Friday, a water test came back clean. The public was not informed until Monday after the presence of birds were discovered.

PSWA estimates the advisory affects about 18,000 homes. Mayor Bill Peduto said there is no evidence of contamination thus far.

The PSWA will flush the water lines for the next 24 to 48 hours to eliminate any risk of contaminated water.

The Pittsburgh Public Safety Department will have water stations set up by 10 a.m. today throughout the North Side for residents who can not boil their own water.

Residents who can not access a water station are advised by public safety officials to call the mayor’s 311 response line. The water supply is also limited.

In addition to Millvale and Reserve Township, these are the areas affected:

Schools affected by the flush and boil advisory include: